In a first-of-its-kind, cross-curricular course, TMI math teachers Eric Drake and Travis Waddington are teaming up to teach a project-based, applied course incorporating math, science, art, and communication skills this fall. Students will use engineering and design to think outside the box and reinvent projects for real-world scenarios. While their technical writing and communication skills will be honed as they pitch projects to subject-matter experts, their problem-solving skills will be put to the test in an application environment. This new Innovation and Design class will give students an opportunity to expand their knowledge and surpass the limits of courses they’ve already mastered at TMI, while pursuing their own passions. 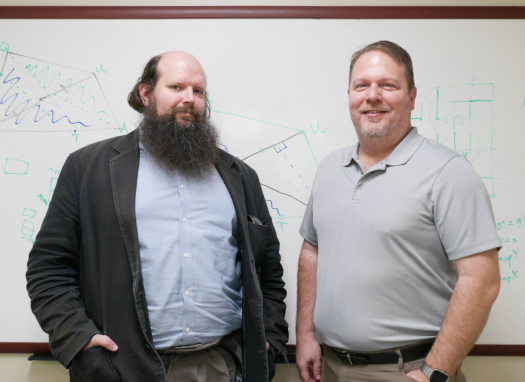 In the first quarter, Drake and Waddington will familiarize students with the project-planning process; introduce them to the tools they’ll have available, including a 3D printer and various electronic devices; and guide them in their project proposals. They’ll start with a few basic projects to give students an understanding of the overall process, then each student’s own personal interests will be the catalyst for selecting a project that they’ll see through to completion. Students will engage in every aspect of project execution from pitching a proposal and formulating a budget to ordering parts and presenting their finished work.

“Once they’ve selected a project, that project becomes their goal,” said Waddington, which then drives the instruction. “There will be things that they need to learn in order to complete the project, but those things will come within the context of that project rather than specific lessons determining the projects.” For example, if they need to learn electrical engineering, they’ll learn that as part of the project rather than learning electrical engineering and making a project around that. Students will be required to identify what new area they’ll be exploring and learning as part of the project proposal, which can be something they’re passionate about or have a desire to learn.

In taking ownership of an independent project, students will learn to develop and set milestones and goals. They’ll also be learning how to operate as a member of a group, understanding team dynamics as team projects are alternated throughout the year. But, to really enhance the students’ experience, subject-matter experts from the professional fields the students’ projects relate to will be brought in. Students will not only have an opportunity to present their completed projects to subject-matter experts, but will gain feedback and knowledge along the way as they are invited to class throughout the year. The experts will be able to share their real-world experiences and years of knowledge with students, providing a new depth to the learning process.

Innovation and Design is a year-long course that is open to students who have completed, or are presently in, AP Calculus (AB or BC) and/or AP Physics (I or C). But, this is just the beginning for introducing more project-based, applied learning into the curriculum at TMI where classroom instruction is taken to the next level through real-world application and critical thinking. Seeing the connection to other ideas in what they’re learning, said Drake, is an experience that can’t be taught from a book.

Mr. Travis Waddington has been a Mathematics Teacher at TMI since 2010. He earned his B.S. degree from the California Institute of Technology and his Ph.D. (ABD) from the State University of New York, Stony Brook.