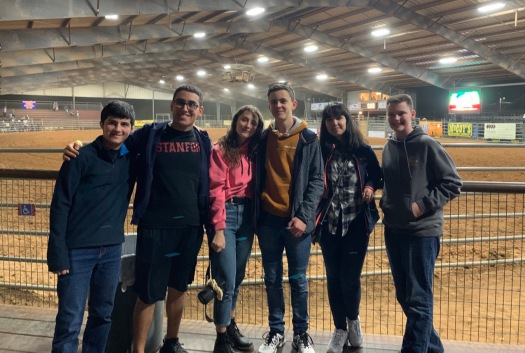 During my hosting of a German exchange student, I learned many valuable lessons. The first was that the true colors of a person do not emerge immediately. It took my partner about a week to truly settle in with my family, and it was not until after that that she really began to feel comfortable communicating with us. The second lesson I learned is that despite a multitude of cultural differences between people, there are always things that connect us. While my German partner and I had many differences, we were able to bond over things such as sports and popular culture. The final lesson that this experience taught me was that patience is key when trying to develop friendships. While there were several instances in which I felt myself growing impatient with the odd habits or communication difficulties of my partner, I had to adjust and remain patient due to my knowledge of the varying cultures between us.

During my German partner’s visit, there was also a multitude of things that surprised me. The most surprising of all was the willingness of my German student to try things that were new and strange to her. I know how skeptical and hesitant we are to try new things in the U.S., no matter what it may be, and I fully expected it to be the same for the Germans. However, I quickly learned that this was not the case, as they were not only willing to try new things but excited to do so. The second thing that surprised me was the strong desire for independence from my German exchange student. I was anticipating her to simply mirror my actions, but almost immediately after she arrived, she was always trying to do things on her own. While it was a pleasant surprise to see her feeling comfortable and independent, it did grow frustrating when she would spontaneously disappear or make independent plans with others. The final thing that surprised me was the quick bonds made between my German student and my friends. I expected her to feel uncomfortable around my friends, but she was actually able to develop relatively strong bonds with them.

There are 3 things that I am really looking forward to experiencing in Germany. The first is that I am hoping to experience traditional German cuisine. I know that Germany is well known for its unique foods, and I am really hoping that I will be given the opportunity to try it when I go there. The second thing I am looking forward to doing is visiting German cities and doing some sightseeing. I have never been to Germany before, so I am really looking forward to being able to see what it is like. The final thing that I am hoping to experience is what school is like in Germany. The only school I have ever experienced is an American private school, so I can’t wait to see what school is like in a foreign country.

As somebody who comes from a multitude of cultures, I believe that it is incredibly important to learn about other cultures. Not knowing anything about other cultures always has a variety of negative consequences. It can lead to stereotypes that are completely and utterly false. It can create a strong polarization between two people groups that are very similar. It can mean that the world will continuously be unable to understand itself. These are all very negative things that can arise as a result of ignorance towards cultures. The only way to avoid them is to develop some sort of knowledge of other cultures. Cultural knowledge is a true example of the more the better. There can never be too much familiarity with other cultures, as all it does it connect the world together. In a world where people are continuously finding ways to ignite conflict and seek out our differences, we need to halt this trend by developing cultural ties. However, these ties have no hope of being developed unless we want to develop them, and the only way to do so is to learn about other cultures. Only then could we truly make the world a better place.

There are two main reasons that support my decision to participate in the German American Partnership Program (GAPP). The first is that I really wanted to further expand my cultural knowledge, and I felt like GAPP was the perfect opportunity for me to do so. I am always looking for new ways to learn about the world, whether it is through videos, articles, or real-life experiences, and I could not pass up on an opportunity as golden as GAPP was. I was presented with an opportunity to learn more about the world, and I wanted to and did seize it. The second motivation for participating in GAPP was to gain valuable knowledge for college. I know that college will involve various trials and tribulations, and one of them will inevitably be to learn to connect with different people. I knew that if I joined GAPP, it would provide me with the ability to understand how to connect and understand those who come from different backgrounds than me. This is especially important for me due to my desire to attend a top-tier college such as Stanford or one of the Ivy League Colleges, which are very diverse. I know that GAPP has prepared me well for this.

During her two weeks here in San Antonio, I did many different things with my partner. Of course, my family and I took her to try the local Texan cuisine, such as Saltgrass Steakhouse and Lupe Tortilla. We also allowed her to try the unique-to-America fast food, such as Chick-Fil-A. We would often take her to La Cantera mall, where she enjoyed shopping around the various stores. We also took her to many local events and locations, most notably being the Tejas Rodeo Company, TopGolf, Six Flags Fiesta Texas, and a San Antonio FC game at Toyota Field. We also visited Downtown San Antonio during our group visit, seeing sights such as the Alamo and Market Street. In the short two weeks that we hosted her here, we tried to do as much as we possibly could.